I have to admit that being a ghost hunter can be scary. Especially when hunting in an environment that has been well-documented as being haunted. Often times the best of these environments (eg. the most fertile for locating spirits) are areas where there have been one or more deaths. At Gettysburg there’s been thousands and thousands who’d tragically died there.

I’d wanted for years to tour Gettysburg so I contacted my old high school best friend who now resides in Pennsylvania. My husband and I wanted to tour Gettysburg, PA, and Kathy lives just twenty miles away from the battlefield there. Ralph wasn’t really interested in a paranormal investigation (he’s the more “level-headed” of the two of us, but I knew Kathy would be up for it.

Kathy and I met two paranormal investigators from the Mason-Dixon Paranormal Society at 9:30 p.m. in the town of Gettysburg. We then followed the two investigators in Kathy’s car, out to an area on the edge of the battlefield. Hundreds of thousands of men died in the area we were visiting during the Civil War. Many of them perished at the bridge site where we were headed. 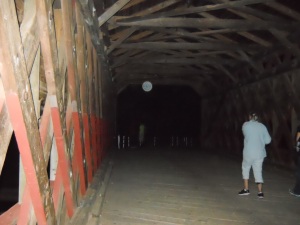 On this photo, my girlfriend is walking ahead of me onto the bridge. Notice the large white orb just above her head up ahead of her. 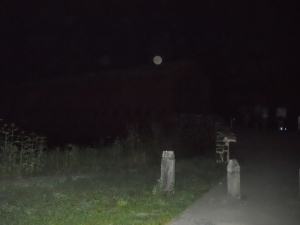 From the time we entered the bridge I experienced a ‘creeped-out’ sensation. We used some of the investigator’s tools in an attempt to communicate with any spirits near us. We experienced the flashlight going on and off as we asked the spirits there to do. It was eerie. 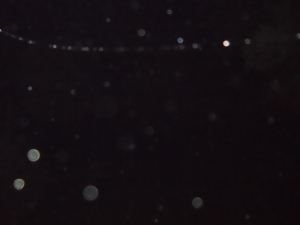 Only such thick, black darkness to the naked eye you could’ve cut it with a knife[/caption]

This is NOT what we saw as we looked out over the river . . . only pitch, black darkness . . . so thick that you could have cut it with a knife. Yet, the above picture is what the ominous night revealed to my Nikon Camera. 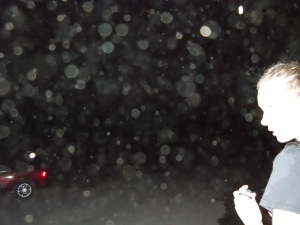 “No orbs could be seen with the naked eye.”

But my camera revealed something in one of my hundreds of photographs I had not noticed until after we’d returned home. Something I found somewhat startling. If you look to the left of this photo, near the far end of the bridge, you will notice a large cloud of red mist covering a man’s head and a woman rushing to him from across the opposite side of the bridge. (I am hoping that you will be able to make it out as well as I could when I enlarged it.) 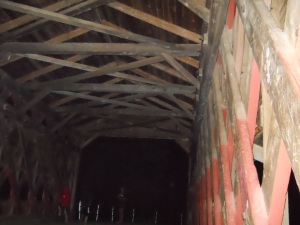 I must admit that Sachs Bridge was an eerie place to tour, and I was relieved to return to Kathy’s home that night.

(Wikipedia reports the following: People have reported residual haunting in the form of battle amidst a mysterious, sudden fog near Sachs Covered Bridge.)