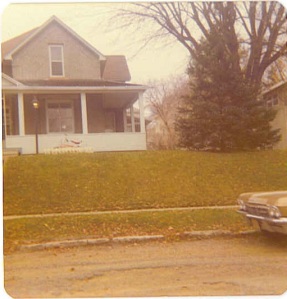 WHY A  BLOG ABOUT THE PARANORMAL?

I became especially interested in the-things-that-go-bump-in-the-night, upon discovering that my ex-husband, our two children and myself had been living in a haunted house for five years.  That was during the mid-to-late 1970s.  The house to which I refer is located in Mankato, Minnesota at 619 North Fourth Street.  (This house is now a private residence again.) Our two children, then nine and four years old, had both come to me (on separate occasions) and told me they were having scary experiences in our house at night.

Our son (aged nine) told me that there was a bogeyman in his closet that looked like a dark shadow.  He said that he would see this shadow moving about outside the front of his closet.  Our daughter, (aged four) told me that during the night someone she couldn’t see had picked her up in their arms in a tiny room off the bathroom, and behind our master bedroom door.

Needless to say, I didn’t take my children seriously.  I told my son to keep his closet door closed, and told my daughter to stay in her bed at night.  I clearly was not very understanding and not at all sympathetic.  Then I shot the above photo of my little girl one day while she was playing house and walking around my bedroom (the master bedroom) in a pair of my high heels. I’d immediately snapped the second photo – the one of our daughter having turned and walking away. As you can see, there is nothing at all unusual about the second shot!)

I hadn’t paid any attention to the bright yellow light swirling about our daughter.   Not back then. (If you look very closely, you will notice that the yellow light appears to be coming out from behind our door – right where my daughter had told me some of these occurrences were happening.  It then seems to SURROUND HER.  (YES!  I DID have this photo debunked!)

Years later upon researching the paranormal, I became suspicious that the house may, in fact, have been haunted after all. (I couldn’t deny the fact that the house has changed residents numerous times since we sold it. No one remains in the house for more than five years!)

The more I researched topics such as hauntings, the paranormal, spirits, orbs, etc., the more I learned about them.  My children are both adults now with children of their own, and to this day, they both insist that those happenings they’d told me about as children, really did happen!  ( Interestingly, my daughter went back there a few years ago and returned to tell me that the tiny room off the bathroom has been walled-off, and that she was told by a neighbor we knew that no one has remained living in the house for more than five years.)